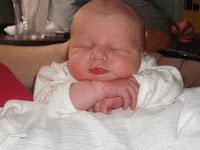 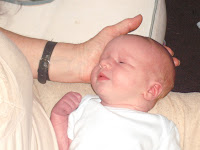 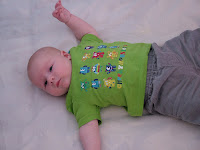 This photo was taken on Sunday,
Peter is now 9 weeks old !
Posted by Gary and Jen, and Ruby and Peter at 15:54 2 comments:

So, its been nearly a year since the last post, and what a year its been. Having had a baby boy just 8 weeks ago, I decided it was time to gather some fruit. Firstly, it was plums, and then blackberries and elderberries.

I made two lots of plum jam with a mixture of locally picked plums. Having stoned the plums (not an easy job) I then put them in a large pan with about 4 tablespoons of water and boiled gently until the flesh was pulpy. I started with about 3lb fruit and then added 3lb of sugar. I gently heated the mix (stirring all the time) until the sugar had dissolved. I then increased the heat and boiled the fruit and sugar until setting point was reached (this took about 10 minutes). In the meantime, I had some clean jars and lids in the oven sterilizing.

I then potted the jam into the jars and sealed. This was yummy with the scones I made on Sunday.
Posted by Gary and Jen, and Ruby and Peter at 09:57 2 comments: